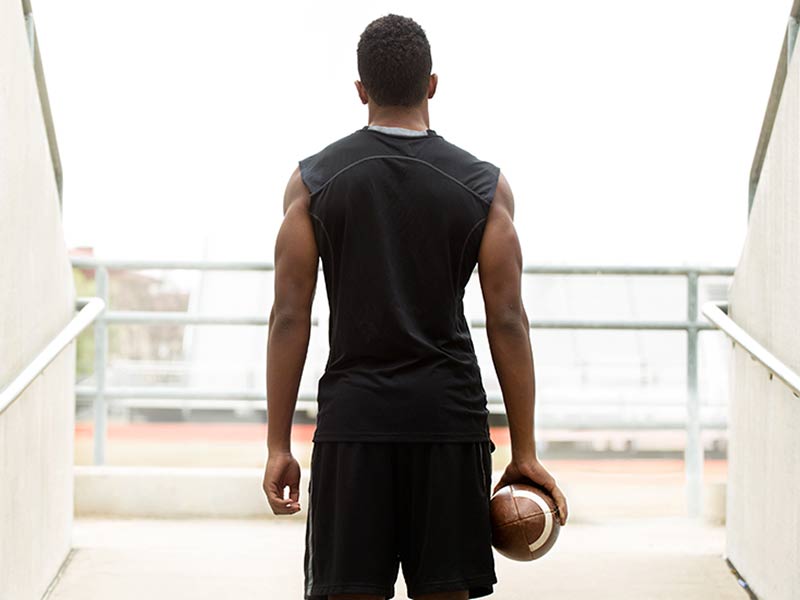 In 2016, NFL linebacker Rob Gronkowski had microdiscectomy surgery—his third back surgery recovery. He came back the following year and was named to his fifth Pro Bowl after a stellar season.

In 2018, he helped the New England Patriots win the Super Bowl. And after retiring the next year, then unretiring and following quarterback Tom Brady to Tampa Bay in 2020, he was a key factor in the Buccaneers’ Super Bowl win.

This return to greatness after back surgery was not just celebrated by Gronk’s teammates—and Tampa Bay fans—but also by anyone who’s ever suffered from back issues and is striving to resume a pain-free life. If a player who gets thrown around by 300-pounders on the football field for a living can have multiple back surgeries, recover, and come back to excel at the highest level in the NFL, it gives hope to so many others.

Comebacks from back surgery recovery

During a microdiscectomy, a small incision is made and the damaged portion of the disc removed. This is a minimally invasive surgical procedure that we perform as an outpatient treatment at DISC Spine Institute. This procedure is commonly used to treat herniated discs, but we don’t typically perform it until we have exhausted other conservative, non-surgical treatments.

Post-surgery, athletes are typical “back to normal” after about 10 weeks. Trying to shortcut the recovery period after a discectomy can backfire and lead to reinjury for anyone. It’s not uncommon, however, for professional athletes to reaggravate their injury, or suffer additional disc issues, down the line simply because of the nature of their movement.

That’s what happened to Tiger Woods. The golf legend had three micro discectomies beginning in 2015, leading up to spinal fusion surgery in April 2017. Specifically, he had minimally invasive anterior lumbar interbody fusion (ALIF) to treat recurrent herniated discs and severe nerve pain in his leg. During ALIF, the degenerated or herniated disc is removed and replaced with either an artificial disc or a bone graft. The process “tricks” the body into thinking it has a fracture, by joining bone with the artificial disc or graft, in order to spur bone growth. An ALIF is performed from the front of the body, using an incision near the belly button.

Fusion surgery is never the first option and is something we consider only after exhausting other, less-invasive options. Despite enormous advancements in fusion techniques that have increased the effectiveness and decreased recovery times and complications, it is still a big decision for professional athletes who are concerned about the range of motion post-surgery. Sometimes, like in the case of now-retired NFL quarterback Peyton Manning, the extreme concern is also coming from the team level.

In 2011, Manning underwent Anterior Cervical Discectomy and Fusion (ACDF). This was after a posterior cervical foraminotomy and several additional treatments failed to give him sufficient relief, and disc degeneration in his neck led to progressive pain and increased weakness and instability in his throwing arm.

During his prolonged recovery and intense rehabilitation, Manning was cut by the Indianapolis Colts, who he had led to a Super Bowl win as the MVP in 2007. He went on to join the Denver Broncos in 2012; he set records for passing yards and touchdowns in 2013 and led the team to a Super Bowl win in 2016.

ACDF is a common surgery for professional athletes and one that has a high rate of success. Pro golfer Davis Love III underwent the procedure in 2013 and came back to win his third Wyndham Championship in 2015.

ALIF is less common for athletes; For Woods, there was no blueprint for recovery and a return to the top after a lumbar fusion. He was quoted as saying he was unsure he would be able to resume his career after his ALIF but went forward with the surgery because his condition had worsened to the point that it was interfering with even the most basic activities.

Three months after Woods’ 2017 surgery, there he was making an impressive post-surgical debut at the Hero World Challenge (and even leading at one point) in December. Playing well at Farmers Insurance Open the following month. Finishing near the top at two PGA Tour events, the Valspar and the Arnold Palmer Invitational, in March 2018. Winning the Tour Championship in September of the same year.

And then, the big one that further cemented his legendary status: The Masters in April 2019, his 15th major championship. It’s not an exaggeration to say this was one of the biggest comebacks in the history of professional sports. In October 2019, Woods tied Sam Snead for the most PGA Tour wins at 82.

Gronkowski began having back issues in college and had his first microdiscectomy during his junior year. He had a second microdiscectomy in 2013. The fact that Gronkowski, Woods, Manning, and many other professional athletes have had multiple spine surgeries may sound disconcerting, but it can actually provide peace of mind for the average person.

These are professional athletes performing at an extremely high level in demanding sports, who have come back from spine surgery to win prestigious awards and world titles. We’re talking about the type of accomplishments few people in life can only dream of, even when perfectly healthy.

Those of us who can’t throw or catch a touchdown pass or drive a golf ball 300 yards may not be worried about returning to championship form. But, the mere fact that these athletes were not just able to be well again, but to excel on such a high scale, can provide comfort for those who are worried that having surgery could inhibit their ability to have a normal, active lifestyle.

The importance of back surgery recovery

The fact that so many professional athletes are able to undergo back surgery and return to their demanding sports involves a lot of factors, but their focus on recovery is worth noting. Athletes who are used to performing at a high level and practicing and training for hours on end are likely conditioned to put the same level of effort into their recovery. This is a good lesson for anyone.

Recovery after an injury or surgery is not always easy. Physical therapy can be tedious and painful. Some recovery processes require medication management, and all of them demand time, patience, and perseverance. The effort you put in equals the results you get out.

This is one of the things we emphasize at the DISC Spine Institute: The importance of seeing the recovery process through without shortcuts. And we promise to be there providing support throughout the entire process, from diagnosis to treatment plans to the moment patients are cleared to go back to work and play.

Whether you need surgery to correct a spinal condition or more conservative treatments can provide a fix for your ailment, you can always count on us at the DISC Spine Institute to treat you like you’re the most important patient in the world—even if your name isn’t in lights.

When it’s time to put an end to your pain, visit the DISC Spine Institute, experts in minimally invasive treatments, the most effective medical procedures to treat and eliminate chronic back pain today. Minimally invasive surgical techniques mean treating chronic back pain is easier than ever, with outpatient treatments, small incisions, and a quicker recovery time instead of a long hospital stay. Why continue to feel pain? Call the DISC Spine Institute today to stop the pain.