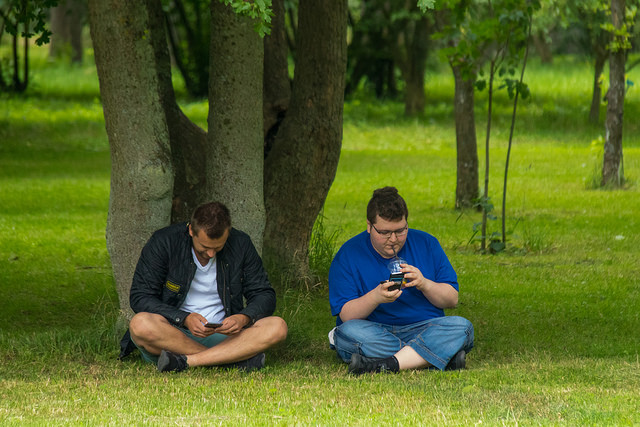 Catching neck and back pain Photo by Susanne Nilsson / CC 2.0

Pokemon Go is a bona fide phenomenon. 100 million downloads and 20 million active daily users trying to “catch ‘em all.”  While there has been praise for the game from many medical professionals who are enthusiastic about the potential for increased physical activity while playing the game, there is a downside. Since the game’s introduction, there has been a growing contingent of injuries related to playing, ranging from trips and falls to traffic accidents to neck and back strain.

Here are some tips to follow to realize the positive health effects of playing Pokemon Go, instead of becoming an anecdote or part of a dangerous statistic.

“Text neck” is a condition that’s been on the rise for several years, a reflection of the dominance of cell phones in today’s society. When playing Pokemon Go, players generally have their head down in the same position as they would when texting, which is among the leading causes of back pain and neck strain.

“The human head weighs about a dozen pounds. But as the neck bends forward and down, the weight on the cervical spine begins to increase,” said the Washington Post in an article about text neck. “At a 15-degree angle, this weight is about 27 pounds, at 30 degrees it’s 40 pounds, at 45 degrees it’s 49 pounds, and at 60 degrees it’s 60 pounds.”

Ouch. No wonder so many players are referring to Pokemon Go as a “pain in the neck”—literally.

This position can lead to “soreness in the neck and shoulders, tightness across the shoulders, chronic headaches, and can exacerbate other spinal conditions,” said DISC Spine Institute. Dr. Mark Valente, a DFW spine surgeon, explained that, “The injuries result from repetitive stress. “Having your head hung forward and looking down at your device for long periods of time is not healthy.”

Holding your phone at or near eye level is a better option. It’s also a good idea to take frequent breaks from looking down to straighten your neck and stretch.

Neck and back strain aren’t the only injuries players are experiencing.

“The game sends users running around streets and parks all over the world trying to catch virtual Pokémon with their cell phone cameras,” said the Daily Mail. “As a result, with their eyes glued to the virtual map on their screen, scores of users have been failing to look out for real life dangers.”

There are tales of broken collarbones (resulting from crossing a busy highway on foot while playing the game), sprained ankles, cuts and bruises, terrible sunburns, bad falls, including two men who tumbled over the edge of a cliff while playing (They suffered “moderate injuries”), and even snake bites.

The best way to avoid these injuries: pay attention to where you’re going—which may be more difficult than it sounds for players who find themselves deeply engaged in the game.

The American Academy of Orthopaedic Surgeons (AAOS) says simply, “Look up, not down, when stepping onto curbs or when walking up stairs or escalators,” said CBS News.

If you didn’t heed the advice of experts seeking to keep you healthy while playing Pokemon Go, it might be time to get treatment for back and neck pain. Today’s minimally invasive treatments and procedures for back pain can put your pain behind you.